People use VPN for their browsing security. ProtonVPN is built on the premise that they can be hacked and it makes them aim to the top in terms of secured VPN.

VPN is about securing internet traffic from unauthorized persons. ProtonVPN is serious about how they handle data. They have implemented data security measures on the transmission and software level, up to the hardware and server, and even to their choice of server locations.

Virtual private networks were first designed to provide privacy for corporations to allow users remote access to the company servers. The data is encrypted at the client and decrypted at the server-side, creating a data tunnel that is secure from any snoopers. Even if the data stream is read by unauthorized parties, it cannot be understood because of the data encryption.

This end-to-end encryption secures data transmission from the client to the server computer. Once the information arrives on the server-side, it is decrypted before being sent forward to other servers. ProtonVPN not only encrypts data but also ensures that the servers are secure from any intrusion.

At the same time, the server locations for the Secure Core Network are unique, because these were all former military camps in the privacy-friendly countries of Switzerland, Iceland, and Sweden. Proton VPN is a cut above the rest when it comes to privacy.

However, it does have several disadvantages, mainly because of this focus. ProtonVPN is a great fit for users who want the most secure VPN service available.

Security is the heart of ProtonVPN. It ensures that the servers are secure. It has Secure Core servers configured at the headquarters before these are shipped to the Secure Core locations.

The Secure Core remote locations are former high-security facilities or bunkers for military uses. This creates a very secure physical location for the servers. 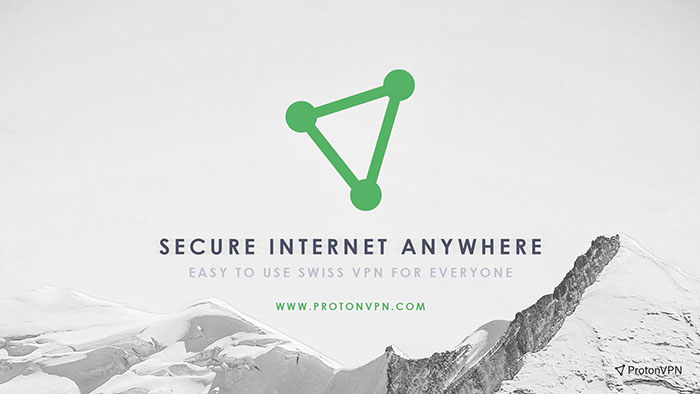 The Secure Core servers run through Switzerland, Iceland, and Sweden. These countries are serious about protecting the individual’s security and privacy of their citizens. They are also not part of the Five Eyes and Fourteen Eyes countries that spy on their citizens.

It is not a coincidence that the majority of the server locations are located in countries that are not affiliated with the Fourteen Eyes, nor with countries that have strong censorship laws.

Other countries that are known for eavesdropping on their citizen’s internet use include Turkey, China and Russia. ProtonVPN does not have any plans in putting up servers in these countries.

It is easy to install and to use. You start running it, and it asks if you want to run it as part of the computer startup. After allowing this, you do not need to run the app as a separate process. Running the software is also very easy, it automatically chooses which server to connect to. Changing servers is also easy.

Switzerland has strict privacy laws. It is interesting that in 1992 before internet privacy was a concern, they already have a privacy law that is pertinent to internet data. The Federal Act on Data Protection was signed into law in 1992 and was implemented in 1993.

Its basic premise is the strict protection of the privacy of the individual. It prohibits the processing of any personal data without the express permission of the subject of the data.

The new Swiss privacy law is to be implemented in 2019 and expected to behave provisions specific to online privacy. Switzerland is not part of the Five Eyes nor the Fourteen Eyes countries. These are countries that have treaties to facilitate the spying of each other’s citizens. 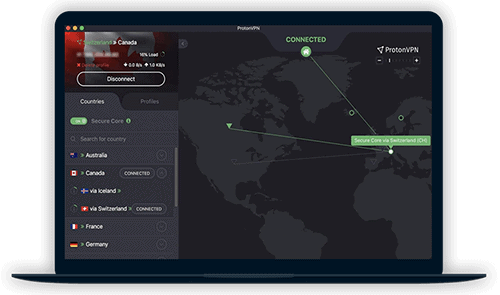 Not as Many Servers

Unlike other VPN services which count its servers in the thousands, ProtonVPN has a relatively smaller number of servers in fewer countries. it has 1057+ servers.

Not as Many Server Locations

ProtonVPN runs on Windows, Mac OS X, Android, and iOS. It can also be run on a Linux using the terminal. You can use ProtonVPN for almost a computer or a mobile device.

TOR is a security measure for file sharing and transfers. Its security is multi-level and is best described as having multiple layers like an onion. Native Tor support over VPN adds even more security to file-sharing and internet use.

Forward security secures the data stream from being hijacked. A new key is generated for every new connection. This prevents old keys from being used by other parties to use with your data stream. This ensures that succeeding streams are not vulnerable to the possible use of old keys.

The recycled keys can be matched with their former users. This would allow anyone with a key to access the data stream and decrypt the information from a particular computer or mobile device.

Ordinary users would not be able to grasp the concept of a Secure Core Network. At the heart of a Secure Core is a server that has been designed to be secure. The only software that assures a high level of security is installed on the server. 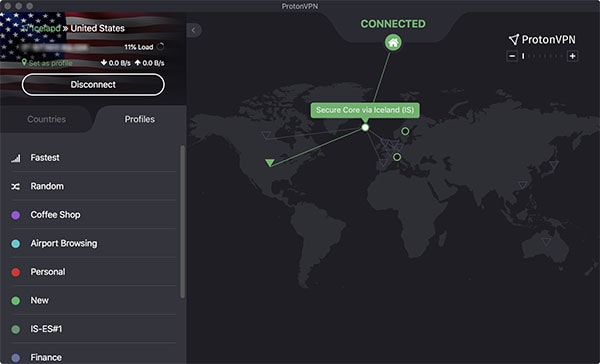 The whole idea behind a Secure Core computer is for ProtonVPN to have full control of the server. The software is installed at the headquarters, and the individual units are sent to the Secure Server.

This is just one layer of security, where the server software is 100% compatible with the rest of the servers. In addition, a secure installation is assured. This gives ProtonVPN the assurance that there is no other software installed other than those that should be on the server.

This may sound paranoid but there are few companies that have complete control over their operating system. The concept of paranoia pervades throughout Secure Core Networks.

Besides the added assurance of having their servers running a limited number of programs, the server locations can be hard to imagine. The server location in Sweden and Switzerland are deep underground.

State of the art encryption is used ProtonVPN tunnels. Traffic uses AES-256, with a 4096-bit RSA key exchange. Message authentication uses HMAC and SHA384. This is the highest strength and strongest encryption protection for your data.

Even among VPN protocols, some are more secure than others. ProtonVPN uses both OpenVPN and IKEv2/IPSec. OpenVPN has proven to be secure due to its self-correcting nature.

Developers are always on the job of double-checking and improving this open-source protocol. Besides the inclusion of these two protocols, ProtonVPN also excludes PPTP and L2TP/IPSec.

ProtonVPN’s security is not limited to securing the data passing through the tunnel. Security goes beyond keeping the servers secure, but also the facilities. The ProtonVPN Secure Core Network is built on securing all the networks, as well as their server locations.

The Swiss server location is inside a former army fallout shelter located below the Alps. The Iceland servers are in a secure location that was formerly a military base. The Swedish data center is also located underground. Also, the servers are configured in Switzerland before being shipped to remote locations. This is a Swiss mentality on security put to practice.

In some cases of faulty software, the VPN uses the ISP’s DNS service and this allows the ISP to be able to read the internet locations requested by the user.

ProtonVPN makes sure that no DNS leak happens via the kill-switch. 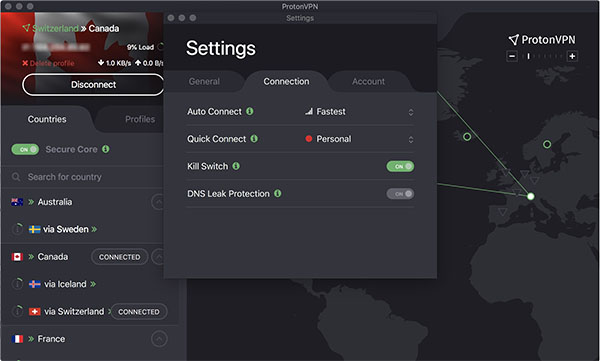 When the data stream is interrupted, and the server loses connection to the client. The tunnel’s kill switches kick in. The client has to create a new connection to continue.

This prevents the client from sending data in the clear since it is going through the public internet. This prevents any possible data hijacking. It also prevents an inadvertent from unencrypted data transmission.

Related to the kill-switch. After the client reconnects to the server, it is automatically reconnected to the VPN service.

The aggregate bandwidth capacity of ProtonVPN is upwards of 531 Gbps. The bandwidth continues to grow with ProtonVPN’s continuous expansion. The servers have a minimum connection of 1 Gbps, with many of them running on 10 Gbps.

ProtonVPN allows a user to signup with an anonymous account. It does not require the account owner to provide any personally-identifying information.

ProtonVPN maintains a transparency report on the website. It details the latest legal request for user information or data of any kind. However, since ProtonVPN does not store any logs, it cannot provide any such information.

Basic – This allows connection to servers in all countries. The user can access the VPN on up to two devices. It is a high-speed connection that also allows for P2P file sharing. The cost is $4 per month or $48 annually.

Plus – The Plus Plan allows connection to servers in all countries. The user can access the VPN on up to five devices. It is a high-speed connection that also allows for P2P file sharing. It also uses the Plus servers, the Secure Core servers, and the Tor Servers. It also allows for secure streaming. The cost is $8 per month or $96 annually.

Visionary -The Visionary plan allows for 10 devices as well as the other features of the Plus Plan. It also has the ProtonMail Visionary included in the package. 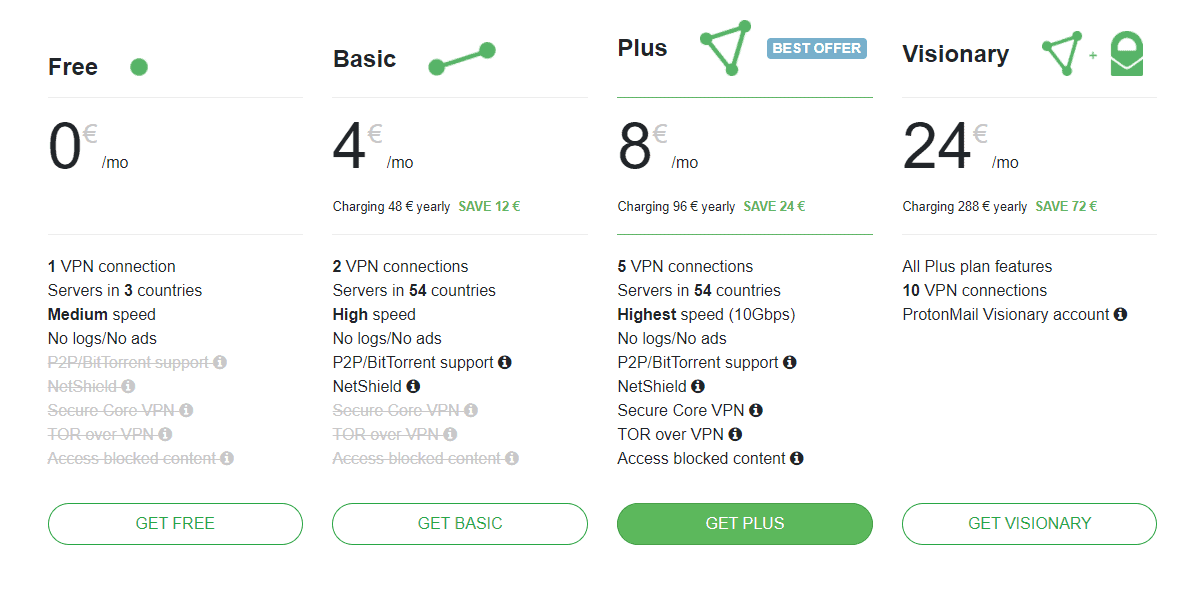 ProtonVPN performs admirably in the Speed Test. However, if you want the best privacy you should try connecting via the Sweden, Iceland, or Switzerland Secure Core network.

This might be a stretch because the Secure Core servers are physically located in Switzerland, Iceland and Sweden. The extra distance may have a discernible effect on your browsing experience.

Proton VPN servers are secured at the offices in Switzerland before being shipped to their remote location. This helps ensure that the software used is also free from any known vulnerability.

Configuring the servers before shipping also ensures that the servers are working properly. This also serves as a quality assurance of the network connectivity at the remote location. The servers use OpenVPN and IKEv2/IPSec protocols ensuring the security of the tunnel. 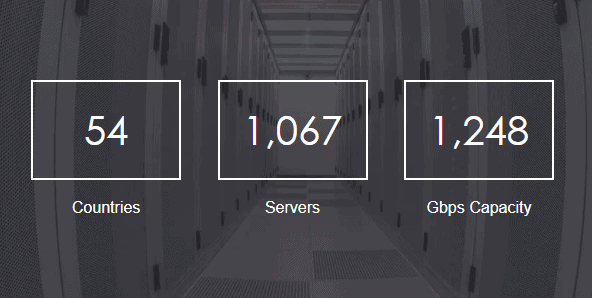 Does ProtonVPN Work With Netflix?

ProtonVPN has an FAQ and a knowledge base for common problems. For any other support issues, thje user can send a message from the site. Support will reply back via the user’s preferred email address (reply back address).

It has a 30-day money-back guarantee. The refund is for the unused portion of the service period. Refunds are only allowed for the initial 30 days after the purchase. Refund will be processed within 30 days of the request.

Yes, it is recommended for those who desire for the most secure VPN in the market. However, if you are looking for a blazing fast VPN and don’t really care to get the best privacy protection, ProtonVPN maybe not the perfect option due to the nature of their high-security encryption protocol that slows down the internet connection.